Corporate Finance Institute (CFI) is a business based in Downtown Vancouver that offers online courses in financial analysis, including modeling and valuation. Their coursework was taken by over 100,000 clients in 2018, who range from university students to investment bankers and accountants. With a history going back decades, CFI has gone through a number of changes that, while beneficial, have also meant a need to constantly update their style, refresh their visual identity, and set down roots in their location.

While CFI’s Vancouver space was sizeable and conveniently located, they were based out of a coworking space. This meant its layout wasn’t ideally set up for their business and didn’t feel like it actually belonged to them. There was a marked lack of rooms and spaces dedicated to CFI’s specific needs: not only was there an insufficient amount of space dedicated to meeting and collaborative rooms — of which they needed several — the space had no dedicated lobby or waiting area for visitors and clients. On top of that, the office felt second hand in an aesthetic sense, with a lack of branding or visual identity to make the space feel like a dedicated home for CFI.

Aura’s approach was a holistic one, covering the necessary changes to the office’s layout and giving it a visual overhaul that made it feel far more like a space that belonged to CFI. In terms of practicality, space was rearranged so that certain areas felt more distinct than others. The hallway adjacent to the main door was widened to create a boundary between the main, open workplace and the area around the entryway newly designated as the waiting area. Multiple rooms were created using glass walls as demarcation points which still allowed for a wide-open, highly visible environment, including both small and large boardrooms, casually furnished meeting spaces, and a dedicated room for recording podcasts. And in terms of branding, well-placed elements of colour — focusing on CFI’s shade of dark blue — adorned window and door frames, as well as walls in the entryway and boardrooms and subtle elements in the carpeted flooring. Lively multicoloured graphics, both abstract and representational, add both visual pizzazz and statements of CFI’s purpose.

Aura worked with both the client and the building’s landlord closely, fitting both the budget and the timeline despite occasional challenges. Even in the event of a setback involving structural asbestos in the office’s exterior walls and columns, Aura was able to come up with creative solutions to the matter that had minimal impact on pre-construction time.

With an emphasis on close-quarters yet spacious-feeling use of the office’s layout, paired with furnishings that made waiting and meeting rooms feel more like welcoming living rooms than an all-business workplace, Aura’s reworking of CFI’s space gave it a feeling of coziness that made it feel like home. Along with the creation of multiple dedicated workspaces, the new layout and design gave CFI employees a versatile and comfortable place to work. 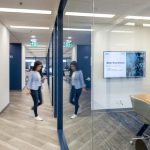 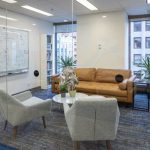 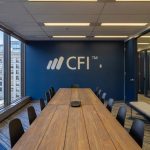 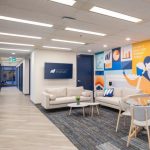 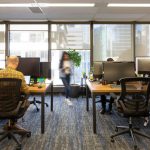 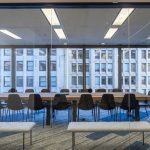 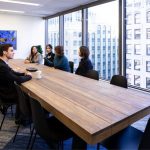 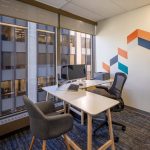 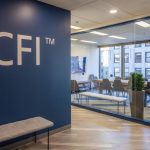 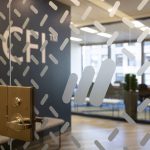