Article written by The Globe and Mail highlighting a conversation between Andrea Yu and Aura’s CEO Dan Boram.

When there was a bug that entered into the office, it just seemed to pervade and go around,” Justin Thouin recalls. “It was an endless loop of people getting sick.”

The midtown Toronto headquarters of Mr. Thouin’s fintech startup, LowestRates.ca, had most of his 30 staff in an open-concept space with no dividers. “People were sitting really close together,” he says. “They’re breathing the same air. It’s not the best setup in the era of COVID-19.” As restrictions gradually lift and offices make plans to open their doors again, businesses such as Mr. Thouin’s are faced with the challenge of creating a safe and healthy work environment.

While his team is working remotely during the pandemic, Mr. Thouin is considering what changes to implement once the government gives him the okay to reopen. “We’re looking at staggering when people are in the office, so perhaps only allowing half the company to be in the office at any particular point in time,” he explains. “We may even schedule or mandate a maximum number of people that are allowed in areas like the lunchroom or meeting rooms.”

Mr. Thouin is also putting ventilation at top of mind and is thinking of purchasing phone sanitizers that clean cellphones using infrared light. “We want people to be healthy and feel secure that we’re doing all we can to keep them safe,” he says.

Dan Boram is the CEO of Aura, an office design firm based in Vancouver. He says that making offices safer from a health perspective doesn’t need to break the bank. “There are a lot of cheap or free changes that can be done to a space, like taping off certain desks, removing certain chairs and spacing people out,” Mr. Boram explains. Both Mr. Thouin and Mr. Boram believe that companies demonstrating a commitment to health and safety will become more desirable to employees and job seekers. The same goes for landlords of commercial office spaces, where top-of-the-line ventilation systems and disinfection protocols of common spaces will become talking points for would-be leaseholders.

For companies willing to invest, Mr. Boram thinks we’ll see more disinfecting services used within offices and a shift toward touchless technology such as door openers, light switches and even touchless reception areas that open by scanning a QR code.

But Mr. Boram believes the lasting impacts of COVID-19 on office design aren’t just in health and safety measures, because of the success of teleworking. “People will continue to work from home as much as four days a week and the office will become a destination for the things that can’t be done from home, like socializing, innovating, problem-solving, training and building culture,” Mr. Boram explains.

With desks taking up as much as 70 per cent of traditional office spaces, independent work such as checking e-mails or writing reports could be done from home, which means businesses can reduce costs by downsizing their square footage. At the end of April, the Canadian software company OpenText announced that it was not planning to reopen half of its offices, representing 15 per cent of their work force, or about 2,000 employees who would now be permanent remote workers. Ottawa-based Shopify has also decided to move most of their 5,000-plus employees to permanent remote working. They are also keeping their offices closed until 2021 to reconfigure for teleworking. 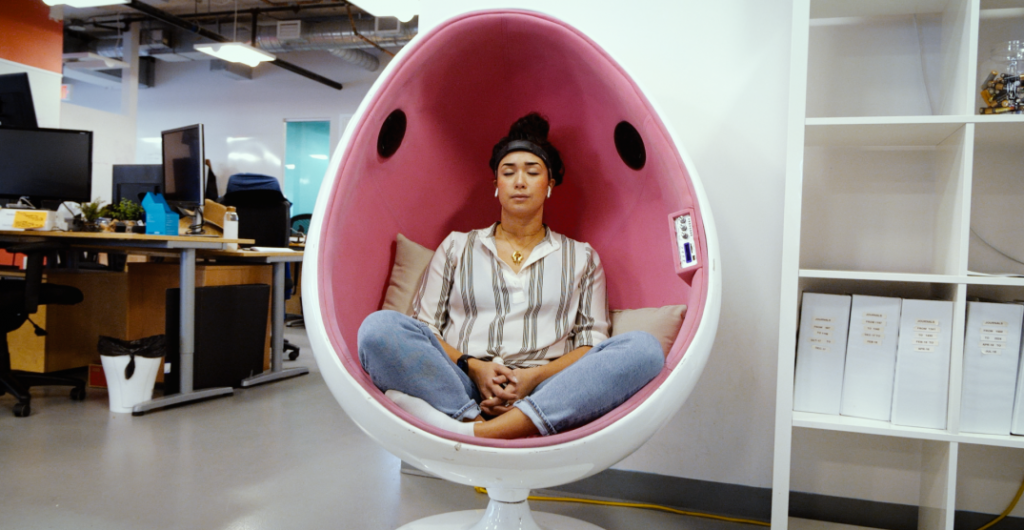 For Interaxon, a tech startup based in Toronto that produces the meditation headband Muse, CEO Derek Luke plans to reduce their real estate footprint by 50 per cent to 75 per cent. “We no longer see a future at Interaxon where everyone is confined to an office desk unless there are clear reasons or preferences to do so,” Mr. Luke says. He currently rents 12,000 square feet of office space for 40 employees. “We have a pretty tightly knit team that has successfully been able to adapt to remote life. The question remaining is: Does anyone want to sublease space we clearly no longer require?”

With just a few months of remote working under our belts, it may be too soon for most companies to decide on going fully remote or downsizing the office. But for those whose leases are ending or are in the midst of transformation, it’s a good opportunity to consider the office of the future today.

Mr. Boram says 70 per cent of his existing projects are being redesigned with a post-COVID world of health, safety and remote working in mind. In fact, he was in the process of moving his own office into a new space when the coronavirus hit. “We had designed it and got our permits, but we have also paused because we want to adopt the new way in which that office will be used,” Mr. Boram says.

Prior to the pandemic, Mr. Thouin had been planning a move to a 6,000-square-foot office space to accommodate future hires. But since the COVID-19 outbreak, he’s instead signed on to a larger 8,000-square-foot office. “Once the government and public health come out with suggestions for how we can keep our team members as safe and healthy as possible, we’re going to have the space to implement whatever those best practices are. And it’s also going to give us some room to grow.”

Mr. Thouin’s company has seen a boost in business since the pandemic with more customers seeking out the loan and insurance rate comparisons that LowestRates.ca offers. “We’re going to spend more money than we need to, but it’s the right thing to do. Because for us to be a successful business, we need to have the best team. And the best teams are happy, healthy and feel secure.”